I was lucky enough for my mum to teach me how to crochet and knit at a young age. Now I want to share that love of craft with the world!

I am so incredibly proud (and relieved) to say that I have finished crocheting the LoveCrochet Crochet Girl Gang CAL blanket. That’s a bit of a mouthful! 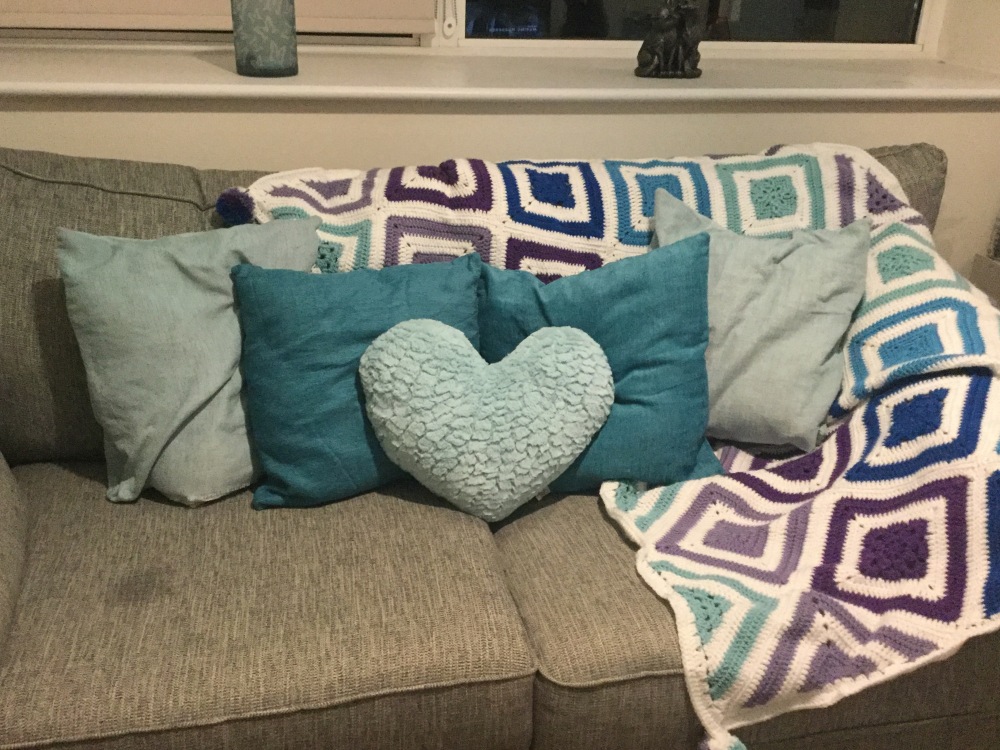 I can’t even tell you how long this blanket has been at the “nearly finished” stage because I thought I was nearly finished so many times. I’ll go through what I’ve thought of my first CAL, but first I want to tell you how happy I am with the finished project.

The colours are everything I wanted them to be in that the blanket just seems to look “at home” draped on my sofa. I also have to applaud the designers because the effect in terms of the layout is just amazing. I never would have thought that turning squares diagonally would have such lovely results.

I have also already mentioned in my previous post about how in love with Paintbox yarns I am. The texture is so amazing. I never would think that it was 100% acrylic because it’s just so soft. And the colour range is just to die for. It makes me feel like I’ll never need another yarn brand again.

Now, on to my experience of making it. This blanket was a CAL so each week a new part of the pattern was released. I was mostly able to keep up with the crocheting despite finding at the time that my attention span was not great. That was until the final week, the “finishing off” week. When this was released I honestly believed I was on the home straight. But it entailed crocheting a further 10 triangles, joining up, crocheting the border and adding the details of either pom-poms or tassels. Whereas, previous weeks had just detailed a pattern for one new square each week.

I found myself losing interest because this final week was taking me so long to complete so I ended up putting the blanket to the side for a while. Then, after a few weeks I picked it up again because I thought it was so silly to leave it unfinished when I was so close to finishing. Then I would yet again find myself losing interest because it was taking so long… so the cycle continued.

But the truth was that all those times I wasn’t actually close to finishing. I would say that I spent as long completing the final week of this CAL as the rest of the CAL combined. Also when it came to crocheting the border, there was literally no guidance. It just said something long the lines of crochet a border of your choice. Having never crocheted a blanket before I had no idea how many stitches I needed to crochet down each side or what type of border would look best.

But it all worked out in the end and I have a beautiful blanket to show for the fact that I persevered with that final week rather than a load of stray squares and triangles. I enjoyed the CAL and the fact that I could ask people questions as we were going along about how to do things. I just feel that the final week could have been more spread out or at least given a more detailed description on how to crochet a basic border.

View all posts by loopedonlife